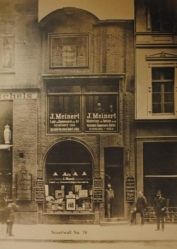 At the beginning of the wave of emigration to America via the Hamburg harbour and during the american civil war, John Meinert, a farmers son, founded company Meinert in 1863 close to the Hamburg harbour.
The comercial use of steam powered ships was right about to start and consequently the need for naval stores, which was the main business during the founding time.

After moving from "Neuer Wall" to "Johannesstraße" downtown of city Hamburg as well as a stay of approx. 50 years in the district of Hamburg called Niendorf  the headquarter is nowadays in district Stellingen quite close to the airport and the motorway A7.

Since 2012 the Company Meinert is a member of a family-owned medium-sized group of companies with a total turnover of more than 60 million Euro.

Meinert - Tradition has a name!